Amazing things can happen, when you give it a go!

A few weeks ago I saw a mention in the newspapers that the TV show,very popular in the UK, ‘Benidorm’ were looking for extras for their new series.

The cast of the TV series Benidorm, ready for their fun

Well as Russ and I needed some work then it seemed rude not to go along and have a go. The hotel was packed with people all waiting their turn to be seen.

A form to fill in and the dreaded questions of have you got your NIE and your Social Security number. Yes to the first, No to the second. Something you learn in Spain is that you always need paperwork……
At the front of the queue it was just a case of handing in your form and a quick photo shoot. After that we were told. you are Benidorm material’? Now we didn’t know whether to be pleased or upset as some of the people being portrayed are, well, a little bit wild! So we took the mention a ‘we will definitely be in touch’ with a pinch of salt!
Yet only 2 weeks later and on a Saturday we were called and asked to be on set the next Monday…..ooops, we were in the Uk and it had to be turned down and I thought that was the end of our chance. A week later and about to board a plane back to Spain we got another call, could we come on Tuesday but we had to have the Social Security number.
Amazing things happen when you give it a go,! Back in the flat we were wondering how on earth to do the paperwork when a friend popped up on Facebook. The perfect person to help us. Thanks Sam, she came to our rescue and next morning all was sorted! A phone call and on set the next day!!!!!

Being an extra is not glamorous and actually can be a bit upsetting. You are asked to bring along bright clothes only to have them rummaged through and discarded as not being ‘bad’ enough. In my case they found a dress that was Ok and clashing shorts and t-shirt for Russ that were just right. Perhaps we were Benidorm material after all. 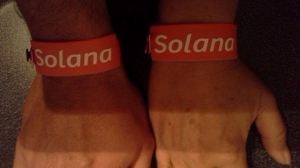 Breakfast in the waiting area on set and then off we went for our first camera call.
I suddenly became the Mum to two young boys and they say never work with animals or children. Well I work the dog pound and that is OK! The kids were great, in fact, seasoned professionals who I could learn from at their ages of 6 and 10. We had to walk through the set so many times that I lost count and suddenly lunch was called.
The cast and crew get first call on the meal whilst we sit out to the side, then our turn. Great food and good people to chat too. Then back on set and doing the same walk through again but this time in front of the camera at waist height so if you see a floral blur at some point then that was me.
We were advised not to speak to the cast and I could understand why as they had to get into character, remember their lines and do it over and over again. Yet they still did break a smile at some point and with two blond good looking chaps by my side then they did break the ice a bit and I was chatting to the crew before I knew it. I was just getting worried about had I talked too much when we were asked to do a few more days filming.
Back in the holding area we chatted with the set technicians who were busy ‘building an airport’ in a day. 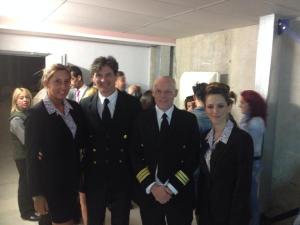 Yes when you truly go for it, amazing things happen and on Facebook here are pictures of the cabin crew in the airport that next day.

So next time you want something to happen, make sure you take that first step. For me the scary bit was not the casting session but actually getting my Social Security number sorted. It makes it a bit more serious now that I am choosing to have  a life over here, get a Dr, get into ‘taxes’ and now I am seeing that yes amazing things can happen and I hope you give it a try too. Take that first step or maybe that scary step and guess what, it will probably be OK.

Recovering Me is about your journey in life, where you are now and where you want to be. Everything that has ever been created has started with a thought. Where can your thoughts take you when you step onto the path of change.
View all posts by recoveringme →
This entry was posted in Coaching, Living Abroad and tagged Benidorm, cast, Chrissy Rock, extras, Johnny Vegas, living abroad, Oliver Stokes, series, Sheila Reid, Siobhan Finneran, Solana, spain, Steve Pemberton, TV. Bookmark the permalink.

4 Responses to Amazing things can happen, when you give it a go!